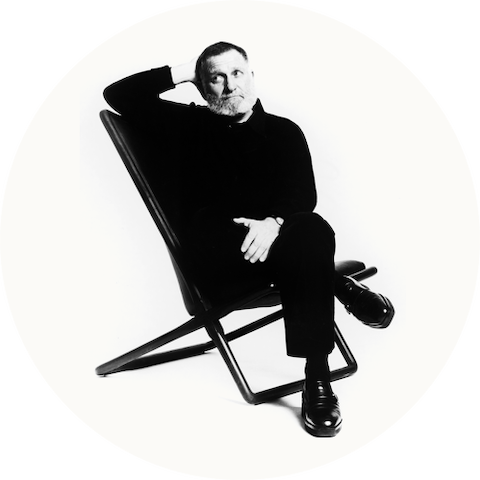 Ward Bennett’s career began at age 13, when he quit school to work in New York’s Garment District. At 16 he went to Europe and continued working in fashion.

Despite attending art schools in Florence and Paris, he was mostly self-taught, with skills ranging from jewelry-making to interior design. “I learn from people,” he said, referencing influences including Georgia O’Keeffe.

Bennett eventually settled in New York, where his reputation earned him many high-profile clients. Lyndon Johnson later asked Bennett to design a chair for his presidential library—“a cross between a barroom chair and a courtroom chair with a little Western saddle.”

“I design interiors and furniture and flatware and so forth, but I think the way I live is maybe the most meaningful.”

Bennett began working with Geiger in 1987. Our first collaboration—a 20-piece collection—was introduced in 1990. In 1993, Geiger acquired Brickel Associates, for whom Bennett had designed more than 150 chairs as their sole designer from the 1960s through the mid-1980s. Recognizing the timeless simplicity and enduring comfort of these designs, we’ve reintroduced several classics from Bennett’s Brickel era.

Bennett died in 2003. Today, he is considered the first American to use industrial materials for home furnishings. He was hailed by the American Institute of Architects for “transforming industrial hardware into sublime objects.” Many his designs are in the permanent collection at MoMA, as well as in the Cooper Hewitt, Smithsonian Design Museum.